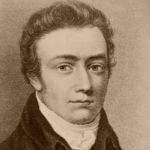 Why Is Samuel Taylor Coleridge Influential?

According to Wikipedia, Samuel Taylor Coleridge was an English poet, literary critic, philosopher, and theologian who, with his friend William Wordsworth, was a founder of the Romantic Movement in England and a member of the Lake Poets. He also shared volumes and collaborated with Charles Lamb, Robert Southey, and Charles Lloyd. He wrote the poems The Rime of the Ancient Mariner and Kubla Khan, as well as the major prose work Biographia Literaria. His critical work, especially on William Shakespeare, was highly influential, and he helped introduce German idealist philosophy to English-speaking culture. Coleridge coined many familiar words and phrases, including "suspension of disbelief". He had a major influence on Ralph Waldo Emerson and American transcendentalism.

Other Resources About Samuel Taylor Coleridge

Samuel Taylor Coleridge has made the following academic contributions: