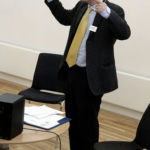 Why Is Tim Ingold Influential?

His research interests are diverse and include creativity, environmental perception, human-animal relations, technology, and many others. His earliest research was an examination of the hunting peoples living in the arctic, dependent on caribou or reindeer. As a result of that experience, he became more curious about interactions between reindeer and humans and ecological anthropology. He has also explored the evolution of language and technology and cultural transmission.

He is a fellow of the British Academy and the Royal Society of Edinburgh. He has published many scholarly works, including Being Alive: Essays on Movement, Knowledge and Description, The Perception of the Environment: Essays on Livelihood, Dwelling and Skill and Hunters, Pastoralists and Ranchers: Reindeer Economies and Their Transformations.

In 1999, he served as president of the Anthropology and Archaeology Section of the British Association for the Advancement of Science. In 2014, the Council of the Royal Anthropological Institute of Great Britain and Ireland, bestowed upon him their highest honor, the Huxley Memorial Medal.

His career is also chronicled in his book, From Science to Art and Back Again: The Pendulum of an Anthropologist.

According to Wikipedia, Timothy Ingold, FBA, FRSE is a British anthropologist, and Chair of Social Anthropology at the University of Aberdeen.Background Ingold was educated at Leighton Park School in Reading, and his father was the mycologist Cecil Terence Ingold. He attended Churchill College, Cambridge, initially studying natural sciences but shifting to anthropology . His doctoral work was conducted with the Skolt Saami of northeastern Finland, studying their ecological adaptations, social organisation and ethnic politics. Ingold taught at the University of Helsinki and then the University of Manchester, becoming Professor in 1990 and Max Gluckman Professor in 1995. In 1999, he moved to the University of Aberdeen. In 2015, he received the honorary doctorate by Leuphana University of Lüneburg . He has four children.

Other Resources About Tim Ingold

What Schools Are Affiliated With Tim Ingold?

Tim Ingold is affiliated with the following schools: