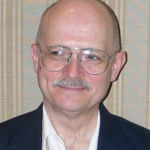 Why Is Vernor Vinge Influential?

According to Wikipedia, Vernor Steffen Vinge is an American science fiction author and retired professor. He taught mathematics and computer science at San Diego State University. He is the first wide-scale popularizer of the technological singularity concept and perhaps the first to present a fictional "cyberspace". He has won the Hugo Award for his novels and novellas A Fire Upon the Deep , A Deepness in the Sky , Rainbows End , Fast Times at Fairmont High , and The Cookie Monster .

Other Resources About Vernor Vinge

What Schools Are Affiliated With Vernor Vinge?

Vernor Vinge is affiliated with the following schools:

What Are Vernor Vinge's Academic Contributions?

Vernor Vinge has made the following academic contributions: