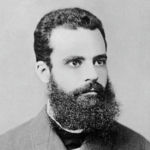 Why Is Vilfredo Pareto Influential?

According to Wikipedia, Vilfredo Federico Damaso Pareto was an Italian civil engineer, sociologist, economist, political scientist, and philosopher. He made several important contributions to economics, particularly in the study of income distribution and in the analysis of individuals' choices. He was also responsible for popularising the use of the term "elite" in social analysis.

Other Resources About Vilfredo Pareto

What Schools Are Affiliated With Vilfredo Pareto?

Vilfredo Pareto is affiliated with the following schools:

What Are Vilfredo Pareto's Academic Contributions?

Vilfredo Pareto has made the following academic contributions: