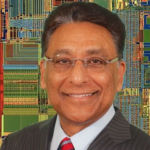 Why Is Vinod Dham Influential?

According to Wikipedia, Vinod Dham is an Indian-American engineer, entrepreneur and venture capitalist. He is known as 'Father of the Pentium Chip' for his contribution to the development of Intel's Pentium micro-processor He is a mentor, advisor and sits on the boards of companies, including startups funded through his India-based fund Indo-US Venture Partners, where he is the founding managing director.

Other Resources About Vinod Dham

What Schools Are Affiliated With Vinod Dham?

Vinod Dham is affiliated with the following schools: