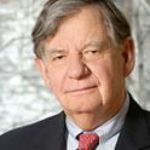 Why Is William G. Bowen Influential?

According to Wikipedia, William Gordon Bowen was President Emeritus of The Andrew W. Mellon Foundation where he served as President from 1988 to 2006. He was the president of Princeton University from 1972 to 1988. Early life William Bowen was born on October 6, 1933 in Cincinnati, Ohio. He was the son of Albert and Bernice Bowen. Albert Bowen was a calculator salesman and Bernice Bowen worked as a dorm mother at the University of Cincinnati. Bowen graduated from Wyoming High School. He attended Denison University, where he played championship tennis and was initiated into the Sigma Chi fraternity. He graduated from Denison in 1955 and from Princeton University in 1958, where he earned a PhD.

Other Resources About William G. Bowen

What Schools Are Affiliated With William G. Bowen?

William G. Bowen is affiliated with the following schools: