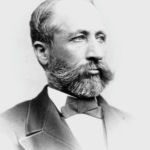 Why Is William S. Clark Influential?

According to Wikipedia, William Smith Clark was an American professor of chemistry, botany and zoology, a colonel during the American Civil War, and a leader in agricultural education. Raised and schooled in Easthampton, Massachusetts, Clark spent most of his adult life in Amherst, Massachusetts. He graduated from Amherst College in 1848 and obtained a doctorate in chemistry from Georgia Augusta University in Göttingen in 1852. He then served as professor of chemistry at Amherst College from 1852 to 1867. During the Civil War, he was granted leave from Amherst to serve with the 21st Regiment Massachusetts Volunteer Infantry, eventually achieving the rank of colonel and the command of that unit.

Other Resources About William S. Clark

What Schools Are Affiliated With William S. Clark?

William S. Clark is affiliated with the following schools: