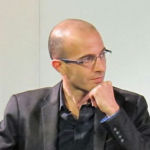 Why Is Yuval Noah Harari Influential?

Yuval Noah Harari was born in Kiryat Ata, Israel in 1976. He earned his PhD at Jesus College in Oxford, specializing in the study of medieval and military history. Harari’s early works focused on the role of military engagement in human history, but he is best known for his more recent works, Sapiens: A Brief History of Humankind and Homo Deus: A Brief History of Tomorrow, which explore all of human history through a macro-historical lens.

Most recently, Harari has published 21 Lessons for the 21st Century which examines the implications of technology of the human experience and initiatives such as universal basic income. He has theorized that by 2050, technological unemployment may have reached a point where some people are, quite simply, unemployable. Universal basic income, he suggests, may be a potential solution, but ultimately the problem of technological unemployment is going to be a serious challenge in the future, and one for which we must be prepared.

His work also challenges the notion of free will, suggesting that free will is illusory and that what we feel is our individual free will is actually a mere consequence of external factors such as upbringing, conditioning, environment, and biology.

He was awarded the Polonsky Prize in 2009, (and again in 2012), and was also selected in 2012 as a member of the Young Israeli Academy of Sciences. Yuval Harari is today a professor in the Department of History at the Hebrew University of Jerusalem.

According to Wikipedia, Yuval Noah Harari is an Israeli public intellectual, historian and a professor in the Department of History at the Hebrew University of Jerusalem. He is the author of the popular science bestsellers Sapiens: A Brief History of Humankind , Homo Deus: A Brief History of Tomorrow , and 21 Lessons for the 21st Century . His writings examine free will, consciousness, intelligence, happiness and suffering.

Other Resources About Yuval Noah Harari

What Schools Are Affiliated With Yuval Noah Harari?

Yuval Noah Harari is affiliated with the following schools:

Yuval Noah Harari has made the following academic contributions: