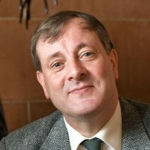 Why Is Alister McGrath Influential?

Alister E. McGrath was born on January 23, 1953 in Belfast, Northern Ireland. After studying at Methodist College Belfast, McGrath earned an undergraduate degree in chemistry from Wadham College, Oxford, in 1975. He pursued graduate research in science while also studying theology, and earned a Ph.D. in molecular biophysics in 1977. He was later ordained as an Anglican priest and awarded a B.D. from Oxford in 1983 and a doctorate in divinity in 2001. He also later earned a third doctorate from Oxford, a D.Litt., in 2013 for his work on science and religion.

McGrath is a renowned apologist, intellectual historian, scientist, and theologian. His research interests include the Protestant Reformation, the dialogue between science and religion, and natural theology as a legitimate field of theological inquiry and as a framework for engaging the dialogue between science, religion, and the humanities. McGrath is Andreos Idreos Professor of Science and Religion at the University of Oxford, and also Professor of Divinity at Gresham College.

Notable published works from McGrath include A Scientific Theology, A Fine-Tuned Universe: The Quest for God in Science and Theology, and Darwinism and the Divine: Evolutionary Thought and Natural Theology.

According to Wikipedia, Alister Edgar McGrath is a Northern Irish theologian, Anglican priest, intellectual historian, scientist, Christian apologist, and public intellectual. He currently holds the Andreas Idreos Professorship in Science and Religion in the Faculty of Theology and Religion, and is a fellow of Harris Manchester College at the University of Oxford, and is Professor of Divinity at Gresham College. He was previously Professor of Theology, Ministry, and Education at King's College London and Head of the Centre for Theology, Religion and Culture, Professor of Historical Theology at the University of Oxford, and was principal of Wycliffe Hall, Oxford, until 2005.

Other Resources About Alister McGrath

What Schools Are Affiliated With Alister McGrath?

Alister McGrath is affiliated with the following schools:

What Are Alister McGrath's Academic Contributions?

Alister McGrath has made the following academic contributions: