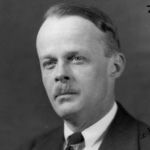 Why Is Allen Tate Influential?

According to Wikipedia, John Orley Allen Tate , known professionally as Allen Tate, was an American poet, essayist, social commentator, and poet laureate from 1943 to 1944. Life Early years Tate was born near Winchester, Kentucky, to John Orley Tate, a Kentucky businessman and Eleanor Parke Custis Varnell from Virginia. On the Bogan side of her grandmother's family Eleanor Varnell was a distant relative of George Washington; she left Tate a copper luster pitcher that Washington had ordered from London for his sister.

Other Resources About Allen Tate

What Schools Are Affiliated With Allen Tate?

Allen Tate is affiliated with the following schools: