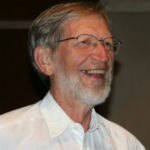 Why Is Alvin Plantinga Influential?

Plantinga is one of the most prominent Christian philosophers alive today, and all of Plantinga’s work, whether in epistemology, logic, or philosophy of mind, is built on a Christian foundation. From his 1967 books, God and Other Minds, Plantinga argues that a person can assert that they know God exists, without argument, as a basic belief, likening this claim of the knowledge of existence of God to the basic belief that other people have minds through analogy. This basic argument developed into what Plantinga has called “reformed epistemology”, through which Plantinga has argued belief in God is rational and basic without evidence of existence.

Other notable works from Plantinga include Warranted Christian Belief and Where the Conflict Really Lies: Science, Religion, and Naturalism.

For his work, Plantinga has received numerous honors and awards, including the Templeton Prize, the Nicholas Rescher Prize for Systematic Philosophy, a Guggenheim Fellowship, an American Academy of Arts and Sciences Fellowship, and honorary degrees from universities including Brigham Young University and Glasgow University. Platinga is the namesake for the University of Notre Dame’s Alvin Plantinga Fellowship.

According to Wikipedia, Alvin Carl Plantinga is an American analytic philosopher who works primarily in the fields of philosophy of religion, epistemology , and logic. From 1963 to 1982, Plantinga taught at Calvin University before accepting an appointment as the John A. O'Brien Professor of Philosophy at the University of Notre Dame. He later returned to Calvin University to become the inaugural holder of the Jellema Chair in Philosophy.

Other Resources About Alvin Plantinga

What Schools Are Affiliated With Alvin Plantinga?

Alvin Plantinga is affiliated with the following schools:

What Are Alvin Plantinga's Academic Contributions?

Alvin Plantinga has made the following academic contributions: