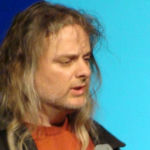 Why Is David Chalmers Influential?

David Chalmers serves currently as Professor of Philosophy and Director of the Centre for Consciousness at the Australian National University, as well as University Professor, Professor of Philosophy and Neural Science, and co-Director of the Center for Mind, Brain and Consciousness (with philosopher Ned Block) at New York University. One of the world’s most influential philosophers on the problem of consciousness, Chalmers has a degree in pure mathematics from the University of Adelaide in Australia, and received his Ph.D. in philosophy and cognitive science from Indiana University Bloomington, where he studied with noted AI researchers and cognitive scientist Douglas Hofstadter.

In 2013, Chalmers was elected to the American Academy of Arts and Sciences. He is an editor for the respected Stanford Encyclopedia of Philosophy. In 2018, he became a judge for the Berggruen Prize, a $1 Million prize for outstanding work in philosophy.

Chalmers is author of the widely read The Conscious Mind published in 1996.

Other Resources About David Chalmers

What Schools Are Affiliated With David Chalmers?

David Chalmers is affiliated with the following schools: