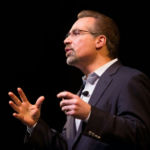 Why Is David Ferrucci Influential?

According to Wikipedia, David Ferrucci was the principal investigator who in 2007–2011 led a team of IBM and academic researchers and engineers to the development of the Watson computer system that won a television quiz. Ferrucci graduated from Manhattan College, with a B.S. degree in biology and from Rensselaer Polytechnic Institute, in 1994 with a Ph.D. degree in computer science specializing in knowledge representation and reasoning. He joined IBM's Thomas J. Watson in 1995 and left in 2012 to join Bridgewater Associates. He is also the Founder, CEO, and Chief Scientist of Elemental Cognition, a venture exploring a new field of study called natural learning, which Ferrucci describes as 'artificial intelligence that understands the world the way people do.'

Other Resources About David Ferrucci

What Schools Are Affiliated With David Ferrucci?

David Ferrucci is affiliated with the following schools: