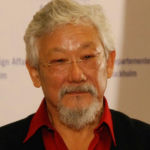 Why Is David Suzuki Influential?

According to Wikipedia, David Takayoshi Suzuki is a Canadian academic, science broadcaster, and environmental activist. Suzuki earned a Ph.D. in zoology from the University of Chicago in 1961, and was a professor in the genetics department at the University of British Columbia from 1963 until his retirement in 2001. Since the mid-1970s, Suzuki has been known for his television and radio series, documentaries and books about nature and the environment. He is best known as host and narrator of the popular and long-running CBC Television science program The Nature of Things, seen in over 40 countries. He is also well known for criticizing governments for their lack of action to protect the environment.

Other Resources About David Suzuki

What Schools Are Affiliated With David Suzuki?

David Suzuki is affiliated with the following schools:

What Are David Suzuki's Academic Contributions?

David Suzuki has made the following academic contributions: