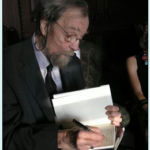 Why Is Donald Hall Influential?

According to Wikipedia, Donald Andrew Hall Jr. was an American poet, writer, editor and literary critic. He was the author of over 50 books across several genres from children's literature, biography, memoir, essays, and including 22 volumes of verse. Hall was a graduate of Phillips Exeter Academy, Harvard, and Oxford. Early in his career, he became the first poetry editor of The Paris Review , the quarterly literary journal, and was noted for interviewing poets and other authors on their craft.

Other Resources About Donald Hall

What Schools Are Affiliated With Donald Hall?

Donald Hall is affiliated with the following schools:

What Are Donald Hall's Academic Contributions?

Donald Hall has made the following academic contributions: