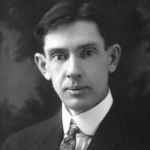 Why Is Elmer McCollum Influential?

According to Wikipedia, Elmer Verner McCollum was an American biochemist known for his work on the influence of diet on health. McCollum is also remembered for starting the first rat colony in the United States to be used for nutrition research. His reputation has suffered from posthumous controversy. Time magazine called him Dr.Vitamin. His rule was, "Eat what you want after you have eaten what you should."

Other Resources About Elmer McCollum

What Schools Are Affiliated With Elmer McCollum?

Elmer McCollum is affiliated with the following schools: