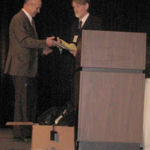 Why Is Eugene Fama Influential?

According to Wikipedia, Eugene Francis "Gene" Fama is an American economist, best known for his empirical work on portfolio theory, asset pricing, and the efficient-market hypothesis. He is currently Robert R. McCormick Distinguished Service Professor of Finance at the University of Chicago Booth School of Business. In 2013, he shared the Nobel Memorial Prize in Economic Sciences jointly with Robert J. Shiller and Lars Peter Hansen. The Research Papers in Economics project ranked him as the 9th-most influential economist of all time based on his academic contributions, . He is regarded as "the father of modern finance", as his works built the foundation of financial economics and have been cited widely.

Other Resources About Eugene Fama

What Schools Are Affiliated With Eugene Fama?

Eugene Fama is affiliated with the following schools: