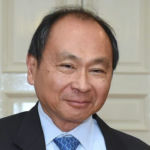 Why Is Francis Fukuyama Influential?

Francis Fukuyama is director of Stanford University’s Ford Dorsey Master’s in International Policy and Mosbacher Director of the Center on Democracy, Development and the Rule of Law, as well as a senior fellow for the Freeman Spogli Institute for International Studies. Fukuyama earned a B.A. in classics from Cornell University and a Ph.D in political science from Harvard University. He has been involved with the Telluride Association, a high school outreach program, since he was an undergrad at Cornell University.

Fukuyama is best known for his book, The End of History and the Last Man, in which he suggests that democracy and capitalism represent the achievement of the end goal of human sociocultural progress. He has also been an active commentator on political and world events, having been critical of the militarism of the George W. Bush administration. He has advocated instead for strategic management of relationships with other countries, seeking to stimulate development of infrastructure and democratic governments by way of education, and financial help.

He is a co-founder of The American Interest, for which he now serves on the editorial board. He is a fellow of the World Academy of Art and Science and sits on the board of Global Financial Integrity.

According to Wikipedia, Yoshihiro Francis Fukuyama is an American political scientist, political economist, and writer. Fukuyama is known for his book The End of History and the Last Man , which argues that the worldwide spread of liberal democracies and free-market capitalism of the West and its lifestyle may signal the end point of humanity's sociocultural evolution and become the final form of human government, an assessment met with criticisms. In his subsequent book Trust: Social Virtues and Creation of Prosperity , he modified his earlier position to acknowledge that culture cannot be cleanly separated from economics. Fukuyama is also associated with the rise of the neoconservative movement, from which he has since distanced himself.

Other Resources About Francis Fukuyama

What Schools Are Affiliated With Francis Fukuyama?

Francis Fukuyama is affiliated with the following schools:

What Are Francis Fukuyama's Academic Contributions?

Francis Fukuyama has made the following academic contributions: