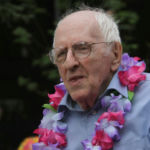 Why Is Frank Kameny Influential?

According to Wikipedia, Franklin Edward Kameny was an American gay rights activist. He has been referred to as "one of the most significant figures" in the American gay rights movement. In 1957, Kameny was dismissed from his position as an astronomer in the U.S. Army's Army Map Service in Washington, D.C., because of his homosexuality, leading him to begin "a Herculean struggle with the American establishment" that would "spearhead a new period of militancy in the homosexual rights movement of the early 1960s".

Other Resources About Frank Kameny

What Schools Are Affiliated With Frank Kameny?

Frank Kameny is affiliated with the following schools: