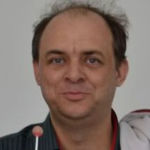 Why Is Graham Harman Influential?

Graham Harman is currently the Distinguished Professor of Philosophy at the Southern California Institute of Architecture. Prior to his current position, Harman taught at the American University in Cairo from 2000-2016, and also held positions at the University of Amsterdam, University of Turin, Yale University, and the European Graduate School. Harman studies philosophy as an undergraduate at St. John’s College, earning his BA in 1990, before earning his MA at Pennsylvania State University, and his PhD at DePaul University, finishing his studies in 1999.

Harman is best known for his role in the current movement of speculative realism in philosophy, and object-oriented-ontology in particular. Harman’s approach is critical of and rejects what he identifies as the anthropocentrism of ontology, i.e. privileging the human experience over that of objects in human-object relations. Additionally, Harman supports a metaphysical realist approach toward rejecting the correlationist view of reality and experience. Essentially (and to simplify a very nuanced philosophical stance) Harman is interested in understanding the experience of objects in the world and developing an ontology of object existence without humans. All of this demands a radical revision of ontology as it has up to now been understood.

According to Wikipedia, Graham Harman is an American philosopher. He is Distinguished Professor of Philosophy at the Southern California Institute of Architecture in Los Angeles. His work on the metaphysics of objects led to the development of object-oriented ontology. He is a central figure in the speculative realism trend in contemporary philosophy.

Other Resources About Graham Harman

What Schools Are Affiliated With Graham Harman?

Graham Harman is affiliated with the following schools: