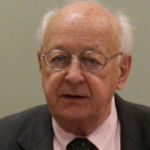 Why Is Harold Demsetz Influential?

According to Wikipedia, Harold Demsetz was an American professor of economics at the University of California at Los Angeles . Career Demsetz grew up on the West Side of Chicago, the grandchild of Jewish immigrants from central and eastern Europe. He studied engineering, forestry, and philosophy at four universities before being awarded a B.A. in economics from the University of Illinois, and an MBA and a Ph.D. from Northwestern University. While a graduate student, he published an article each in Econometrica and the Journal of Political Economy.

Other Resources About Harold Demsetz

What Schools Are Affiliated With Harold Demsetz?

Harold Demsetz is affiliated with the following schools: