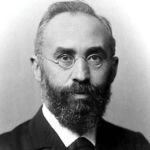 Why Is Hendrik Lorentz Influential?

According to Wikipedia, Hendrik Antoon Lorentz was a Dutch physicist who shared the 1902 Nobel Prize in Physics with Pieter Zeeman for the discovery and theoretical explanation of the Zeeman effect. He also derived the Lorentz transformation underpinning Albert Einstein's special theory of relativity, as well as the Lorentz force, which describes the combined electric and magnetic forces acting on a charged particle in an electromagnetic field.

Other Resources About Hendrik Lorentz

What Schools Are Affiliated With Hendrik Lorentz?

Hendrik Lorentz is affiliated with the following schools: