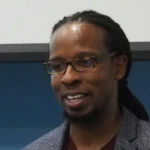 Why Is Ibram X. Kendi Influential?

According to Wikipedia, Ibram Xolani Kendi is an American author, professor, anti-racist activist, and historian of race and discriminatory policy in America. In July 2020, he assumed the position of director of the Center for Antiracist Research at Boston University.

Other Resources About Ibram X. Kendi

What Schools Are Affiliated With Ibram X. Kendi?

Ibram X. Kendi is affiliated with the following schools:

Ibram X. Kendi has made the following academic contributions: