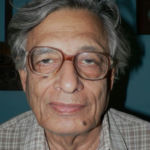 Why Is Irfan Habib Influential?

According to Wikipedia, Irfan Habib is an Indian historian of ancient and medieval India, following the methodology of Marxist historiography in his contributions to economic history. He identifies as a Marxist and is well known for his strong stance against Hindutva and Islamic fundamentalism. He has authored a number of books, notably the Agrarian System of Mughal India, 1556–1707, an Atlas of the Mughal Empire: Political and Economic Maps With Detailed Notes, and an Atlas of Ancient Indian History . As the general editor, he is also the driving force behind the A People's History of India series, volumes of which continue to be released.

Other Resources About Irfan Habib

What Schools Are Affiliated With Irfan Habib?

Irfan Habib is affiliated with the following schools: