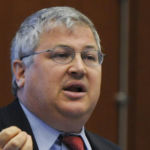 Why Is Jack Goldsmith Influential?

Jack Goldsmith is a professor of law at Harvard Law School and a senior fellow at Stanford University’s Hoover Institution. He has earned a B.A. from Washington & Lee University, a B.A. and M.A. from University of Oxford, and a J.D. from Yale Law School.

Goldsmith is a prolific writer with many published works regarding international law, federal courts, and national security, including The Limits of International Law, and The Terror Presidency. He has also recently written a personal memoir about his childhood titled, In Hoffa’s Shadow: A Stepfather, A Disappearance in Detroit, and My Search for the Truth, in which he talks about his stepfather, Chuckie O’Brien, who is widely believed to have contributed to the disappearance of the labor leader, Jimmy Hoffa.

Goldsmith has held a number of important positions, including Special Counsel to the General Counsel of the U.S. Department of Defense, and U.S. Assistant Attorney General. His time in government service was largely dominated by the torture scandal roiling the Department of Justice, and he assisted officials with navigating the treacherous legal waters of the Abu Ghraib torture scandal and Guantanamo Bay, Cuba.

He also authorized a program called Stellar Wind while he was at the Office of Legal Counsel, approving warrantless monitoring of email communications among American citizens, which was ended by James Comey in 2004.

According to Wikipedia, Jack Landman Goldsmith is an American lawyer and Harvard Law School professor who has written extensively in the fields of international law, civil procedure, federal courts, conflict of laws, and national security law. He has been "widely considered one of the brightest stars in the conservative legal firmament."

Other Resources About Jack Goldsmith

What Schools Are Affiliated With Jack Goldsmith?

Jack Goldsmith is affiliated with the following schools:

What Are Jack Goldsmith's Academic Contributions?

Jack Goldsmith has made the following academic contributions: