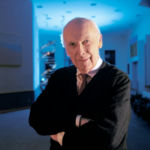 Why Is James Watson Influential?

Areas of Specialization: Molecular Biology, Genetics
James D. Watson is a zoologist, geneticist and molecular biologist. He earned a Bachelor of Science from the University of Chicago and a PhD from Indiana University. He is most recently well-known due to his controversial comments about race and genetics, for which he has been largely ostracized.

Prior to his unfortunate foray into racial genetics, he was highly regarded and famous for his work on molecular biology. He is credited for significant contributions to our understanding of cancer, neurological diseases and the genetic basis for cancer and other diseases.

He worked closely with Francis Crick, Maurice Wilkins on groundbreaking research on the structure of nucleic acid. Their work was awarded with the Nobel Prize in Physiology or Medicine. The discovery of the double helix is considered one of the more pivotal discoveries in science. He has also written a number of books, including a textbook, Molecular Biology of the Gene and The Double Helix.

His body of work has been undermined by his positions on homosexuality, obesity, intellect, and physical attractiveness—traits for which he promoted genetic manipulation. In his view, measures should be taken to selectively reproduce to increase intelligence or physical attractiveness, and to decrease unfavorable traits such as a propensity for obesity.

According to Wikipedia, James Dewey Watson is an American molecular biologist, geneticist, and zoologist. In 1953, he co-authored with Francis Crick the academic paper proposing the double helix structure of the DNA molecule. Watson, Crick and Maurice Wilkins were awarded the 1962 Nobel Prize in Physiology or Medicine "for their discoveries concerning the molecular structure of nucleic acids and its significance for information transfer in living material". In subsequent years, it has been recognized that Watson and his colleagues did not properly attribute colleague Rosalind Franklin for her contributions to the discovery of the double helix structure.

Other Resources About James Watson

What Schools Are Affiliated With James Watson?

James Watson is affiliated with the following schools:

What Are James Watson's Academic Contributions?

James Watson has made the following academic contributions: