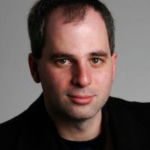 Why Is James F. O'Brien Influential?

According to Wikipedia, James F. O'Brien is a computer graphics researcher and professor of computer science and electrical engineering at the University of California, Berkeley. He is also co-founder and chief science officer at Avametric, a company developing software for virtual clothing try on. In 2015, he received an award for Scientific and Technical Achievement from the Academy of Motion Pictures Arts and Sciences.

Other Resources About James F. O'Brien

What Schools Are Affiliated With James F. O'Brien?

James F. O'Brien is affiliated with the following schools: