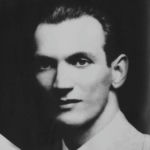 Why Is Jan Karski Influential?

According to Wikipedia, Jan Karski was a Polish soldier, resistance-fighter, and diplomat during World War II. He is known for having acted as a courier in 1940–1943 to the Polish government-in-exile and to Poland's Western Allies about the situation in German-occupied Poland. He reported about the state of Poland, its many competing resistance factions, and also about Germany's destruction of the Warsaw Ghetto and its operation of extermination camps on Polish soil that were murdering Jews, Poles, and others.

Other Resources About Jan Karski

What Schools Are Affiliated With Jan Karski?

Jan Karski is affiliated with the following schools:

What Are Jan Karski's Academic Contributions?

Jan Karski has made the following academic contributions: