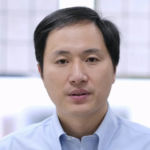 Why Is He Jiankui Influential?

He is the founder of two biotechnology companies, Direct Genomics and Vienomics Biotech. His most notable accomplishment, a successful gene-editing experiment, resulted in the birth of the very first gene-edited babies. His supposed intent was to protect the offspring of an HIV positive father from contracting the disease.

The reception to their announcement quickly went from exultant to ominous. The scientific community writ large condemned his research methods and felt that he had breached ethical and moral codes of conduct.

Having implanted gene-edited embryos in two different mothers, three genetically engineered children were born. The potential implications for the procedure on the future health and wellbeing of the children is not yet known.

Chinese authorities declared his work abominable and he was detained by the government for some time. He was later sentenced to three years in prison and a substantial fine.

According to Wikipedia, He Jiankui is a Chinese biophysics researcher who was an associate professor in the Department of Biology of the Southern University of Science and Technology in Shenzhen, China. Earning his Ph.D. from Rice University in Texas on protein evolution, including that of CRISPR, He learned gene-editing techniques as a postdoctoral researcher at Stanford University in California.

Other Resources About He Jiankui

What Schools Are Affiliated With He Jiankui?

He Jiankui is affiliated with the following schools: