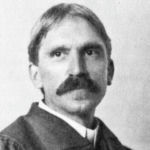 Why Is John Dewey Influential?

According to Wikipedia, John Dewey was an American philosopher, psychologist, and educational reformer whose ideas have been influential in education and social reform. He was one of the most prominent American scholars in the first half of the twentieth century.

Other Resources About John Dewey

What Schools Are Affiliated With John Dewey?

John Dewey is affiliated with the following schools:

What Are John Dewey's Academic Contributions?

John Dewey has made the following academic contributions: