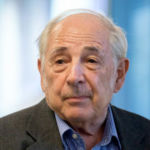 Why Is John Searle Influential?

According to Wikipedia, John Rogers Searle is an American philosopher widely noted for contributions to the philosophy of language, philosophy of mind, and social philosophy. He began teaching at UC Berkeley in 1959, and was Willis S. and Marion Slusser Professor Emeritus of the Philosophy of Mind and Language and Professor of the Graduate School at the University of California, Berkeley until 2019.

Other Resources About John Searle

What Schools Are Affiliated With John Searle?

John Searle is affiliated with the following schools: