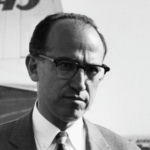 Why Is Jonas Salk Influential?

According to Wikipedia, Jonas Edward Salk was an American virologist and medical researcher who developed one of the first successful polio vaccines. He was born in New York City and attended the City College of New York and New York University School of Medicine.

Other Resources About Jonas Salk

What Schools Are Affiliated With Jonas Salk?

Jonas Salk is affiliated with the following schools: