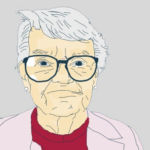 Why Is Judith Jarvis Thomson Influential?

According to Wikipedia, Judith Jarvis Thomson was an American philosopher who studied and worked on ethics and metaphysics. She is credited with naming, developing, and initiating the extensive literature on the trolley problem first posed by Philippa Foot. Thomson also published a paper titled "A Defense of Abortion", which argues that the procedure is morally permissible even if it is assumed that a fetus is a person with a right to life. She was elected a member of the American Philosophical Society in 2019.

Other Resources About Judith Jarvis Thomson

What Schools Are Affiliated With Judith Jarvis Thomson?

Judith Jarvis Thomson is affiliated with the following schools: