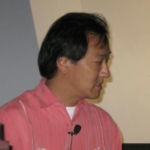 Why Is Ken Ono Influential?

Ono specializes in number theory, and is widely published, with over 160 article credits to his name. In particular, Ono is known for his expertise in integer partitions, which he has applied toward unraveling the work of famed mathematical phenom Srinivasa Ramanujan. Notably, Ono found a framework in 2014 that solves questions arising from the Rogers-Ramanujan identities. He also solved the Umbral moonshine conjecture, another Ramanujan puzzle. From this association, Ono is also considered an expert on Ramanujan, and was associate producer and mathematical consultant for the biographical movie on Ramanujan, The Man Who Knew Infinity.

Notable works from Ono include My Search for Ramanujan: How I Learned to Count.

For his work, Ono has received a variety of awards and honors, including the Prose Award for Best Scholarly Book in Mathematics, the Albert E. Levy Award for Scientific Research, a Guggenheim Fellowship, and the Presidential Early Career Award.

According to Wikipedia, Ken Ono is a Japanese-American mathematician who specializes in number theory, especially in integer partitions, modular forms, umbral moonshine, the Riemann Hypothesis and the fields of interest to Srinivasa Ramanujan. He is the Asa Griggs Candler Professor of Mathematics at Emory University and the Thomas Jefferson Professor of Mathematics at the University of Virginia. He served as the Vice President of the American Mathematical Society from 2018 to 2021.

Other Resources About Ken Ono

What Schools Are Affiliated With Ken Ono?

Ken Ono is affiliated with the following schools: