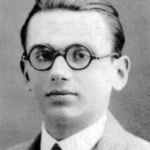 Why Is Kurt Gödel Influential?

According to Wikipedia, Kurt Friedrich Gödel was a logician, mathematician, and philosopher. Considered along with Aristotle and Gottlob Frege to be one of the most significant logicians in history, Gödel had an immense effect upon scientific and philosophical thinking in the 20th century, a time when others such as Bertrand Russell, Alfred North Whitehead, and David Hilbert were using logic and set theory to investigate the foundations of mathematics, building on earlier work by the likes of Richard Dedekind, Georg Cantor and Frege.

Other Resources About Kurt Gödel

What Schools Are Affiliated With Kurt Gödel?

Kurt Gödel is affiliated with the following schools: