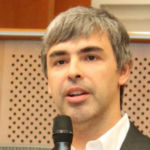 Why Is Larry Page Influential?

According to Wikipedia, Lawrence Edward Page is an American computer scientist and Internet entrepreneur. He is best known as one of the co-founders of Google, along with Sergey Brin. Page was the chief executive officer of Google from 1997 until August 2001 then from April 2011 until July 2015 when he moved to become CEO of Alphabet Inc. , a post he held until December 4, 2019. He remains an Alphabet board member, employee, and controlling shareholder.

Other Resources About Larry Page

What Schools Are Affiliated With Larry Page?

Larry Page is affiliated with the following schools: