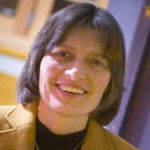 Why Is Lene Hau Influential?

According to Wikipedia, Lene Vestergaard Hau is a Danish physicist and educator. She is the Mallinckrodt Professor of Physics and of Applied Physics at Harvard University. In 1999, she led a Harvard University team who, by use of a Bose–Einstein condensate, succeeded in slowing a beam of light to about 17 metres per second, and, in 2001, was able to stop a beam completely. Later work based on these experiments led to the transfer of light to matter, then from matter back into light, a process with important implications for quantum encryption and quantum computing. More recent work has involved research into novel interactions between ultracold atoms and nanoscopic-scale systems. In addition to teaching physics and applied physics, she has taught Energy Science at Harvard, involving photovoltaic cells, nuclear power, batteries, and photosynthesis. In addition to her own experiments and research, she is often invited to speak at international conferences, and is involved in structuring the science policies of various institutions. She was keynote speaker at EliteForsk-konferencen 2013 in Copenhagen, which was attended by government ministers, as well as senior science policy and research developers in Denmark.

Other Resources About Lene Hau

What Schools Are Affiliated With Lene Hau?

Lene Hau is affiliated with the following schools: