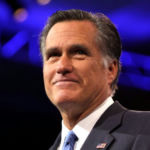 Why Is Mitt Romney Influential?

According to Wikipedia, Willard Mitt Romney is an American politician, lawyer and businessman serving as the junior United States senator from Utah since January 2019, succeeding Orrin Hatch. He served as the 70th governor of Massachusetts from 2003 to 2007 and was the Republican Party's nominee for president of the United States in the 2012 election, losing to the then incumbent president, Barack Obama.

Other Resources About Mitt Romney

What Schools Are Affiliated With Mitt Romney?

Mitt Romney is affiliated with the following schools: