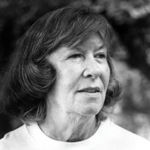 Why Is Mona Van Duyn Influential?

According to Wikipedia, Mona Jane Van Duyn was an American poet. She was appointed United States Poet Laureate in 1992. Biography Early years Van Duyn was born May 9, 1921 in Waterloo, Iowa. She grew up in the small town of Eldora where she read voraciously in the town library and wrote poems secretly in notebooks from her grade school years to her high school years. Van Duyn earned a B.A. from Iowa State Teachers College in 1942, and an M.A. from the State University of Iowa in 1943, the year she married Jarvis Thurston. She and Thurston studied in the Ph.D. program at Iowa. In 1946 she was hired as an instructor at the University of Louisville when her husband became an assistant professor there. Together they began Perspective: A Quarterly of Literature and the Arts in 1947, which she edited for the next twenty years. They shifted that journal to Washington University in St. Louis when they moved there in 1950.

Other Resources About Mona Van Duyn

What Schools Are Affiliated With Mona Van Duyn?

Mona Van Duyn is affiliated with the following schools:

Mona Van Duyn has made the following academic contributions: