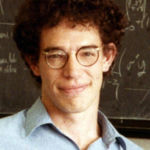 Why Is Neil Turok Influential?

According to Wikipedia, Neil Geoffrey Turok is a South African physicist. He is a director emeritus of the Perimeter Institute for Theoretical Physics since 2019. He specializes in mathematical physics and early-universe physics, including the cosmological constant and a cyclic model for the universe.

Other Resources About Neil Turok

What Schools Are Affiliated With Neil Turok?

Neil Turok is affiliated with the following schools: