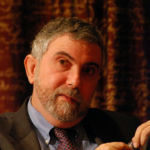 Why Is Paul Krugman Influential?

Paul Krugman is one of the most highly respected and well-known economists in the world. He is a professor emeritus of the Woodrow Wilson School of Princeton University as well as a distinguished professor of the Graduate Center Economics Ph.D program and scholar at the Luxembourg Income Study Center, both at Graduate Center, CUNY.

Krugman’s work in examining international trade patterns and the global distribution of economic activity and resources was awarded the Nobel Memorial Prize in Economic Sciences in 2008. His academic work has focused on economic geography, international finance and trade, and currency fluctuations. As a columnist for The New York Times, he has written countless articles on nearly every imaginable economics topic, including taxation, income distribution, and liquidity traps. He is credited with pioneering a new trade theory and a new economic geography through his work.

A favorite among peers in his field, a 2011 survey named Krugman that year’s favorite living economist under the age of 60. He has also been the recipient of the James Joyce Award, the EPI Distinguished Economist Award, and the Gerald Loeb Award for Commentary.

Krugman continues to write, commentate, and critique for various news outlets, and is widely credited for his gift for masterfully explaining complex economic concepts to the general public. His works include Microeconomics (with Robin Wells), Macroeconomics (with Robin Wells), International Economics: Theory and Policy (with Maurice Obstfeld and Marc Melitz), and Arguing with Zombies: Economics, Politics, and the Fight for a Better Future.

According to Wikipedia, Paul Robin Krugman is an American economist and public intellectual, who is Distinguished Professor of Economics at the Graduate Center of the City University of New York, and a columnist for The New York Times. In 2008, Krugman was the winner of the Nobel Memorial Prize in Economic Sciences for his contributions to New Trade Theory and New Economic Geography. The Prize Committee cited Krugman's work explaining the patterns of international trade and the geographic distribution of economic activity, by examining the effects of economies of scale and of consumer preferences for diverse goods and services.

Other Resources About Paul Krugman

What Schools Are Affiliated With Paul Krugman?

Paul Krugman is affiliated with the following schools:

What Are Paul Krugman's Academic Contributions?

Paul Krugman has made the following academic contributions: