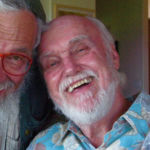 Why Is Ram Dass Influential?

According to Wikipedia, Ram Dass , also known as Baba Ram Dass, was an American spiritual teacher, guru of modern yoga, psychologist, and author. His best-selling 1971 book, Be Here Now, which has been described by multiple reviewers as "seminal", helped popularize Eastern spirituality and yoga in the West. He authored or co-authored twelve more books on spirituality over the next four decades, including Grist for the Mill , How Can I Help? , and Polishing the Mirror .

Other Resources About Ram Dass

What Schools Are Affiliated With Ram Dass?

Ram Dass is affiliated with the following schools: