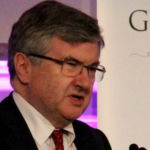 Why Is Richard J. Evans Influential?

Evans was knighted as part of the 2012 Birthday Honours and is a founding fellow of the Learned Society of Wales. He was awarded the 1988 Wolfson History Prize, the 1994 Fraenkel Prize in History and the 1993 Civic Medal for Arts and Sciences of the Free and Hanseatic City of Hamburg.

Evans has not been without controversy. His views on the Holocaust and Marxism have drawn both criticism and admiration. He remains active as a lecturer and contributor for the History Channel’s documentaries about Germany and World War II.

According to Wikipedia, Sir Richard John Evans is a British historian of 19th- and 20th-century Europe with a focus on Germany. He is the author of eighteen books, including his three-volume The Third Reich Trilogy . Evans was Regius Professor of History at the University of Cambridge from 2008 until his retirement in 2014, and President of Cambridge's Wolfson College from 2010 to 2017. He has been Provost of Gresham College in London since 2014. Evans was appointed Knight Bachelor for services to scholarship in the 2012 Birthday Honours.

Other Resources About Richard J. Evans

What Schools Are Affiliated With Richard J. Evans?

Richard J. Evans is affiliated with the following schools:

Richard J. Evans has made the following academic contributions: