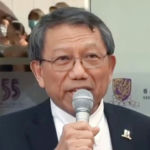 Why Is Rocky Tuan Influential?

According to Wikipedia, Rocky Sung-chi Tuan is a Hong Kong medical researcher and bioengineer, currently the vice-chancellor and president of the Chinese University of Hong Kong, where he served as Distinguished Visiting Professor and Director of the Institute for Tissue Engineering and Regenerative Medicine prior to taking up the vice-chancellorship. Previously he was on the faculty at the University of Pittsburgh, where he held a number of roles: Arthur J. Rooney Sr. Professor of Sports Medicine and the Executive Vice Chair of the Department of Orthopaedic Surgery, and a professor in the Department of Bioengineering. He was the director of the Center for Military Medicine Research and an associate director of the McGowan Institute for Regenerative Medicine. Despite his position in Hong Kong, he continues to serve as the Director of the University of Pittsburgh's Center for Cellular and Molecular Engineering. For the 2018 fiscal year, he was one of the top 25 highest paid University of Pittsburgh employees.

Other Resources About Rocky Tuan

What Schools Are Affiliated With Rocky Tuan?

Rocky Tuan is affiliated with the following schools: