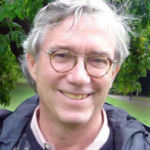 Why Is Rudy Rucker Influential?

According to Wikipedia, Rudolf von Bitter Rucker is an American mathematician, computer scientist, science fiction author, and one of the founders of the cyberpunk literary movement. The author of both fiction and non-fiction, he is best known for the novels in the Ware Tetralogy, the first two of which both won Philip K. Dick Awards. Until its closure in 2014 he edited the science fiction webzine Flurb.

Other Resources About Rudy Rucker

What Schools Are Affiliated With Rudy Rucker?

Rudy Rucker is affiliated with the following schools:

What Are Rudy Rucker's Academic Contributions?

Rudy Rucker has made the following academic contributions: