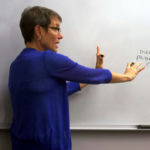 Why Is Sally Haslanger Influential?

Sally Haslanger, currently appointed the Ford Professor of Philosophy at the Massachusetts Institute of Technology (MIT), completed her undergraduate education at Reed College in 1977, and earned her PhD in philosophy at the University of California, Berkeley in 1985. Currently one of the most influential people in philosophy, Haslanger has previously held appointments in the Ivy league, at Princeton University and at the University of Pennsylvania.

Haslanger’s work and influence are broad. Starting her career in the areas of analytic metaphysics and epistemology, Haslanger has since built on ancient philosophy foundations to create notable work in the realms of social and political philosophy. Haslanger is perhaps best known for her work in feminist theory and critical race theory, applying ancient and metaphysical principles (such as Aristotle’s hylomorphic theory) to these relatively modern areas of inquiry, especially in regards to the notion of social construction. On that topic, Haslanger has been a formidable voice, publishing groundbreaking pieces investigating and analyzing social categories that are traditionally seen as universal and unquestionable. Haslanger’s work is perhaps best represented in the book Resisting Reality: Social Construction and Social Critique, which collects two decades of her papers, covering and connecting topics including epistemology, metaphysics, and social and gender issues.

For her work, Haslanger has been named the 2010 Distinguished Woman Philosopher by the Society for Women in Philosophy, was the president of the Eastern Division of the American Philosophical Association, and was the recipient of a 2018 Guggenheim Fellowship.

Other Resources About Sally Haslanger

What Schools Are Affiliated With Sally Haslanger?

Sally Haslanger is affiliated with the following schools: