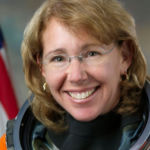 Why Is Sandra Magnus Influential?

According to Wikipedia, Sandra Hall Magnus is an American engineer and a former NASA astronaut. She returned to Earth with the crew of STS-119 Discovery on March 28, 2009, after having spent 134 days in orbit. She was assigned to the crew of STS-135, the final mission of the Space Shuttle. She is also a licensed amateur radio operator with the call sign KE5FYE. From 2012 until 2018 Magnus was the executive director of the American Institute of Aeronautics and Astronautics.

Other Resources About Sandra Magnus

What Schools Are Affiliated With Sandra Magnus?

Sandra Magnus is affiliated with the following schools: