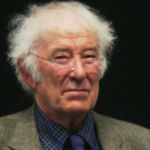 Why Is Seamus Heaney Influential?

According to Wikipedia, Seamus Justin Heaney was an Irish poet, playwright and translator. He received the 1995 Nobel Prize in Literature. Among his best-known works is Death of a Naturalist , his first major published volume. Heaney was and is still recognised as one of the principal contributors to poetry in Ireland during his lifetime. American poet Robert Lowell described him as "the most important Irish poet since Yeats", and many others, including the academic John Sutherland, have said that he was "the greatest poet of our age". Robert Pinsky has stated that "with his wonderful gift of eye and ear Heaney has the gift of the story-teller." Upon his death in 2013, The Independent described him as "probably the best-known poet in the world".

Other Resources About Seamus Heaney

What Schools Are Affiliated With Seamus Heaney?

Seamus Heaney is affiliated with the following schools:

What Are Seamus Heaney's Academic Contributions?

Seamus Heaney has made the following academic contributions: