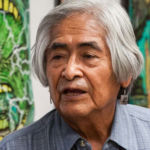 Why Is Simon J. Ortiz Influential?

Simon J. Ortiz (born May 27, 1941) is a Native American writer, poet, and enrolled member of the Pueblo of Acoma. Ortiz is one of the key figures in the second wave of what has been called the Native American Renaissance. He attended Fort Lewis College in Durango, Colorado, as a chemistry major with the help of a BIA educational grant. While enthralled with language and literature, the young Ortiz never considered pursuing writing seriously; at the time, it was not a career that seemed viable for Native people; it was “a profession only whites did.” Since 1968, Ortiz has taught creative writing and Native American literature at various institutions, including San Diego State University, the Institute of American Indian Arts in Santa Fe, Diné College, the College of Marin, the University of New Mexico, Sinte Gleska University, and the University of Toronto. He currently teaches at Arizona State University.

Ortiz is a recipient of the New Mexico Humanities Council Humanitarian Award, the National Endowment for the Arts Discovery Award, the Lila Wallace Reader’s Digest Writer’s Award, a National Endowment for the Arts Fellowship, and was an Honored Poet recognized at the 1981 White House Salute to Poetry. In 1981, From Sand Creek: Rising In This Heart Which Is Our America, received the Pushcart Prize in poetry. Ortiz received a Lifetime Achievement Award from the Returning the Gift Festival of Native Writers (the Wordcraft Circle of Native Writers and Storytellers) and the Native Writers’ Circle of the Americas (1993).

According to Wikipedia, Simon J. Ortiz is a Native American writer, poet, and enrolled member of the Pueblo of Acoma. Ortiz is one of the key figures in the second wave of what has been called the Native American Renaissance.

Other Resources About Simon J. Ortiz

What Schools Are Affiliated With Simon J. Ortiz?

Simon J. Ortiz is affiliated with the following schools: