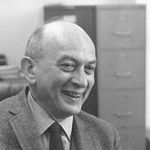 Solomon Eliot Asch was a Polish-American Gestalt psychologist and pioneer in social psychology. He created seminal pieces of work in impression formation, prestige suggestion, conformity, and many other topics. His work follows a common theme of Gestalt psychology that the whole is not only greater than the sum of its parts, but the nature of the whole fundamentally alters the parts. Asch stated: "Most social acts have to be understood in their setting, and lose meaning if isolated. No error in thinking about social facts is more serious than the failure to see their place and function" . Asch is most well known for his conformity experiments, in which he demonstrated the influence of group pressure on opinions. A Review of General Psychology survey, published in 2002, ranked Asch as the 41st most cited psychologist of the 20th century.

Senior college of the City University of New York, located in Brooklyn